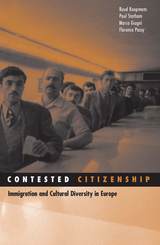 From international press coverage of the French government’s attempt to prevent Muslims from wearing headscarves to terrorist attacks in Madrid and the United States, questions of cultural identity and pluralism are at the center of the world’s most urgent events and debates. Presenting an unprecedented wealth of empirical research garnered during ten years of a cross-cultural project, Contested Citizenship addresses these fundamental issues by comparing collective actions by migrants, xenophobes, and antiracists in Germany, Britain, France, the Netherlands, and Switzerland.

Revealing striking cross-national differences in how immigration and diversity are contended by different national governments, these authors find that how citizenship is constructed is the key variable defining the experience of Europe’s immigrant populations. Contested Citizenship provides nuanced policy recommendations and challenges the truism that multiculturalism is always good for immigrants. Even in an age of European integration and globalization, the state remains a critical actor in determining what points of view are sensible and realistic—and legitimate—in society.