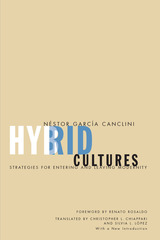 University of Minnesota Press, 2005
Paper: 978-0-8166-4668-5
When it was originally published, Hybrid Cultures was foundational to Latin American cultural studies. This now-classic work features a new introduction in which Nestor Garcia Canclini calls for a cultural politics to contain the damaging effects of globalization and responds to relevant theoretical developments over the past decade.Garcia Canclini questions whether Latin America can compete in a global marketplace without losing its cultural identity. He moves with ease from the ideas of Gramsci and Foucault to economic analysis, from appraisals of the exchanges between Octavio Paz and Jorge Luis Borges to Chicano film and grafitti. Hybrid Cultures at once clarifies the development of democratic institutions in Latin America and reveals that the most destructive ideological trends are still going strong.
AUTHOR BIOGRAPHY
Christopher L. Chiappari is assistant professor of anthropology at St. Olaf College. Silvia L. Lopez is assistant professor of Spanish at Carleton College.Renato Rosaldo is professor of social science and chair of the department of anthropology at Stanford University. He is the author of Ilongot Headhunting, 1883-1974: A Study in Society and History and Culture and Truth: The Remaking of Social Analysis.
TABLE OF CONTENTS


Contents Introduction Foreword Renato Rosaldo Entrance From Utopias to the Market Latin American Contradictions: Modernism without Modernization? Artists, Middlemen, and the Public: To Innovate or to Democratize? The Future of the Past The Staging of the Popular The Popular and Popularity: From Political to Theatrical Representation Hybrid Cultures, Oblique Powers Exit Bibliography Index