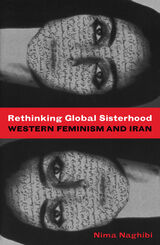 Western women’s involvement in Persia dates from the mid-nineteenth century, when female adventurers and missionaries first encountered their veiled Muslim “sisters.” Twentieth-century Western and state-sponsored Iranian feminists continued to use the image of the veiled woman as the embodiment of backwardness. Yet, following the 1979 revolution, indigenous Iranian feminists became more vocal in their resistance to this characterization.

In Rethinking Global Sisterhood, Nima Naghibi makes powerful connections among feminism, imperialism, and the discourses of global sisterhood. Naghibi investigates topics including the state-sponsored Women’s Organization of Iran and the involvement of feminists such as Betty Friedan and Gloria Steinem in the Iranian feminism movement before and during the 1979 revolution. With a potent analysis of cinema, she examines the veiled woman in the films of Tahmineh Milani, Ziba Mir-Hosseini and Kim Longinotto, and Mahnaz Afzali.

At a time when Western relations with the Muslim world are in crisis, Rethinking Global Sisterhood provides much-needed insights and explores the limitations and possibilities of cross-cultural feminist social and political interventions.

Nima Naghibi is assistant professor of English at Ryerson University in Toronto.