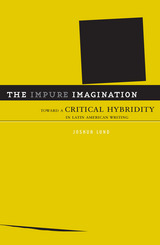 “Hybridity” is a term that has been applied to Latin American politics, literature, and intellectual life for more than a century. During the past two decades, it has figured in—and been transfigured by—the work of prominent postcolonialist writers and thinkers throughout the Americas.

In this pathbreaking work, Joshua Lund offers a thoughtful critique of hybridity by reading contemporary theories of cultural mixing against their historical precursors. The Impure Imagination is the first book to systematically analyze today’s dominant theories in relation to earlier, narrative manifestations of hybridity in Latin American writing, with a particular focus on Mexico and Brazil.

Generally understood as the impurification of standard or canonized forms, hybridity has historically been embraced as a basic marker of Latin American regional identity and as a strategy of resistance to cultural imperialism. Lund contends that Latin American theories and narratives of hybridity have been, and continue to be, underwritten by a structure of colonial power. Here he provides an informed critique and cogent investigation of this connection, its cultural effects, and its political implications. Using the emergence of hybridity as an analytical frame for thinking about culture in the Americas, Lund examines the contributions of influential thinkers, including Néstor García Canclini, Homi Bhabha, Jacques Derrida, Giorgio Agamben, Jorge Luis Borges, Antonio Candido, and many others.

Distinguished by its philosophical grounding and underpinned with case studies, The Impure Imagination employs postcolonial theory and theories of race as it explores Latin American history and culture. The result is an original and interrogative study of hybridity that exposes surprising—and unsettling—similarities with nationalistic discourses.

Joshua Lund is assistant professor of Spanish at the University of Pittsburgh. His essays have appeared in A Contracorriente, Race & Class, Cultural Critique, and the Journal of Latin American Cultural Studies.
TABLE OF CONTENTS