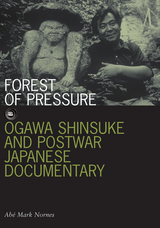 “Extraordinarily valuable, illuminating, and even entertaining, Forest of Pressure brims with the types of information that only a key insider can get his hands on.” —Mitsuhiro Yoshimoto, New York University

Ogawa Productions—known in Asia as Ogawa Pro—was an influential filmmaking collective that started in the 1960s under the direction of Ogawa Shinsuke (1936–1992). Between 1968 and the mid-1970s, Ogawa Pro electrified the Japanese student movement with its Sanrizuka documentary series—eight films chronicling the massive protests over the construction of the Narita airport—which has since become the standard against which documentaries are measured in Japan.

A critical biography of a collective, Forest of Pressure explores the emergence of socially committed documentary filmmaking in postwar Japan. Analyzing Ogawa Pro’s films and works by other Japanese filmmakers, Abé Mark Nornes addresses key issues in documentary theory and practice, including individual and collective cinema production modes and the relationship between subject and object. Benefiting from unprecedented access to Ogawa Pro’s archives and interviews with former members, Forest of Pressure is an innovative look at the fate of political filmmaking in the wake of the movement’s demise.