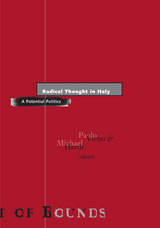 BUY
Radical Thought in Italy: A Potential Politics
edited by Paolo Virno and Michael Hardt
University of Minnesota Press, 2006
Paper: 978-0-8166-4924-2
Over the past several decades, Italian revolutionary politics has offered a model for new forms of political thinking. Radical Thought in Italy continues that tradition by providing an original view of the potential for a radical democratic politics today that speaks not only to the Italian situation but also to a broadly international context. First, the essays settle accounts with the culture of cynicism, opportunism, and fear that has come to permeate the Left. They then proceed to analyze the new difficulties and possibilities opened by current economic conditions and the crisis of the welfare state. Finally, the authors propose a series of new concepts that are helpful in rethinking revolution for our times. Contributors: Giorgio Agamben, U of Verona and Collège Internationale de Philosophie, Paris; Massimo De Carolis, U of Salerno; Alisa Del Re, U of Padua; Augusto Illuminati, U of Urbino; Maurizio Lazzarato; Antonio Negri, U of Paris VIII; Franco Piperno, U of Calabria; Marco Revelli, U of Turin; Rossana Rossanda; Carlo Vercellone; Adelino Zanini. Paolo Virno is the author of several books, including the recently translated A Grammar of the Multitude. Michael Hardt is professor of literature and romance studies at Duke University.