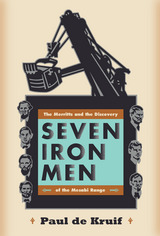 In the tradition of great American rags to riches stories, Seven Iron Men weaves together the history of how the seven Merritt brothers discovered iron ore on the Mesabi Range. In 1890 they were poised to become one of the wealthiest families in America but lost it all to industrialist John D. Rockefeller.

“The tale of their long and furious quest makes for one of the most melodramatic stories in American history. . . . The Merritts leap from the chronicle in all the colors of life—especially Lon, the king of them all, with his maudlin poetizing, his childlike faith in mankind, and his incredible tropical hat. It is a tale full of thrills, shot with sardonic humors.” —H. L. Mencken, The Nation

“Certainly it is no small contribution to the history of the American people to unfold the tale of the discovery and development of those huge iron deposits of the Mesabi Range flanking much of Lake Superior. To these perhaps quite as much as to any other one factor the country owes its industrial supremacy in the ago of steel.” —New York Herald Tribune

Paul de Kruif (1890–1971) was a microbiologist, served as a contributing editor to Reader’s Digest, and was the best-selling author of Microbe Hunters.