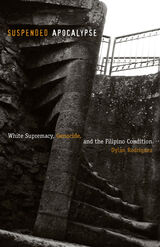 Suspended Apocalypse is a rich and provocative meditation on the emergence of the Filipino American as a subject of history. Culling from historical, popular, and ethnographic archives, Dylan Rodríguez provides a sophisticated analysis of the Filipino presence in the American imaginary. Radically critiquing current conceptions of Filipino American identity, community, and history, he puts forth a genealogy of Filipino genocide, rooted in the early twentieth-century military, political, and cultural subjugation of the Philippines by the United States.

Suspended Apocalypse critically addresses what Rodríguez calls "Filipino American communion," interrogating redemptive and romantic notions of Filipino migration and settlement in the United States in relation to larger histories of race, colonial conquest, and white supremacy. Contemporary popular and scholarly discussions of the Filipino American are, he asserts, inseparable from their origins in the violent racist regimes of the United States and its historical successor, liberal multiculturalism.

Rodríguez deftly contrasts the colonization of the Philippines with present-day disasters such as Hurricane Katrina and Mount Pinatubo to show how the global subjection of Philippine, black, and indigenous peoples create a linked history of genocide. But in these juxtapositions, Rodríguez finds moments and spaces of radical opportunity. Engaging the violence and disruption of the Filipino condition sets the stage, he argues, for the possibility of a transformation of the political lens through which contemporary empire might be analyzed, understood, and perhaps even overcome.

AUTHOR BIOGRAPHY
Dylan Rodríguez is associate professor of ethnic studies at the University of California, Riverside. He is the author of Forced Passages: Imprisoned Radical Intellectuals and the U.S. Prison Regime (Minnesota, 2006).
TABLE OF CONTENTS

Acknowledgments
1. Filipino American Communion: Cultural Alienation and the Conditions of Community
2. Deformed Nationalism and Arrested Raciality: the Grammar and Problematic of a "Filipino American" Common Sense
3. "Its Very Familiarity Disguises Its Horror": White Supremacy, Genocide, and the Statecraft of Pacifica Americana
4. Suspended Apocalypse: Towards a Fanonian Analytic of the Filipino Condition
5. "Death Was Swiftly Running After Us": Disaster, Evil, and Radical Possibility
Notes
Index