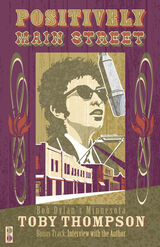 “A first-rate novelistic account of Thompson’s own psyche as he uncovers the Dylan few people know . . . A new look at young Dylan done with kindness, enthusiasm and superb language.” —William Kennedy, Look Magazine

“Essential reading. Thompson, unprecedentedly, managed to interview not only Echo Helstrom, almost certainly the ‘Girl of the North Country,’ but Dylan’s mother and brother, his uncle, his friends.” —Michael Gray, Bob Dylan Encyclopedia

“Dylan fans will not want to miss this book.” —Sioux City Journal

“Enough to satisfy any Dylan fan with all the gossip he’ll ever need.” —Huntsville Times

“Well worth the attention of anyone who has fallen under the spell of the boy from the North Country.” —Los Angeles Times

"Thompson tracked down anybody who knew 'Die-lan' (as the Hibbingites called him), including the guy at the local music store, the guy at the motorcycle shop, his English and music teachers, his uncles, his brother David and even his reluctant but ultimately charmingly chatty mother. Of course, Thompson traveled into a few dead ends. But the stuff with Dylan's mom and his high school girlfriend, Echo Helstrom, is priceless. Positively Main Street is a free-wheelin', fun and quick read that is surprisingly informative." —Minneapolis Star Tribune

"Hundreds of books have been written about Minnesota's most famous songwriter; Bob Dylan's life and music has been analyzed by fans, scholars, and even himself. So, why do we need Toby Thompson's Positively Main Street: Bob Dylan's Minnesota? Because it's a forgotten milestone. Published in 1971, it was the first biography on Dylan. Although it's been out of print since 1977, the book is, with the exception of Dylan's autobiography, perhaps the most readable and necessary volume on the folk icon." —City Pages

"The new Positively Main Street is a lovely little book, even better than the original, a cherished addition to the Dylan bookshelf. Thompson and the University of Minnesota Press have enhanced what was already a classic and made it available to a whole new audience. Dylan fans owe them a debt of gratitude." —The Dylan Daily

"[Thompson] ends up not only interviewing 'the Girl from the North Country,' Echo Haelstrom, and 'Bob’s' mother and brother and teachers etc., but also filling in for Dylan among his old friends and acquaintances, playing Dylan’s songs on the guitar and harmonica and singing them, in a way that may have seemed stratingly revolutionary at the time for a journalist to do, he actually recreates a bit of Dylan’s existence as his own." —Michael Lally, Lally's Alley

AUTHOR BIOGRAPHY
Toby Thompson is associate professor of creative writing at Penn State University and the author of Saloon and The ‘60s Report. He has also written for numerous magazines including Rolling Stone, Vanity Fair, Playboy, and Esquire.
TABLE OF CONTENTS