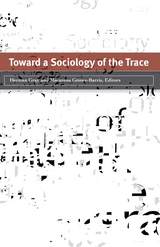 Using culture as an entry point, and informed by the work of contemporary social theorists, the essays in this volume identify and challenge sites where the representational dimension of social life produces national identity through scripts of belonging, or traces.
The contributors utilize empirically based studies of social policy, political economy, and social institutions to offer a new way of looking at the creation of meaning, representation, and memory. They scrutinize subjects such as narratives in the U.S. coal industry's change from digging mines to removing mountaintops; war-related redress policies in post-World War II Japan; views of masculinity linked to tequila, Pancho Villa, and the Mexican Revolution; and the politics of subjectivity in 1970s political violence in Thailand.
Contributors: Sarah Banet-Weiser, U of Southern California; Barbara A. Barnes, U of California, Berkeley; Marie Sarita Gaytán; Avery F. Gordon, U of California, Santa Barbara; Tanya McNeill, U of California, Santa Cruz; Sudarat Musikawong, Willamette U; Akiko Naono, U of Kyushu; Rebecca R. Scott, U of Missouri.
AUTHOR BIOGRAPHY
Herman Gray is professor of sociology and communication at the University of California, Santa Cruz.
Macarena Gómez-Barris is assistant professor of sociology and American studies and ethnicity at the University of Southern California.
TABLE OF CONTENTS