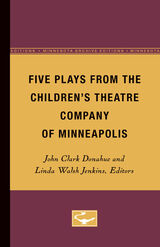 Among the notable productions of the Children's Theatre Company of the Minneapolis Society of Fine Arts, a leading exponent of children's theater in this country, have been plays that are adaptations of classics in children's literature. This volume makes available the scripts of five of these adaptations, along with illuminating information about the productions and the company itself.

The plays include two adaptations by Frederick Gaines, two by Timothy Mason, and one by Richard Shaw. Mr. Gaines's plays are based on Washington Irving's The Legend of Sleepy Hollow and Charles Dickens's A Christmas Carol.One of Mr. Mason's plays, Kidnapped in London, is an adaptation of part of Master Skylark by John Bennett, and the other, Robin Hood: A Story of the Forest, is based on part of the Robin Hood legend. Mr. Shaw's play is an adaptation in Kabuki form of the Grimms' fairy tale Sleeping Beauty.

Linda Walsh Jenkins writes a general introduction and commentary. Background information about each play includes excerpts from discussions among directors, composers, designers, and playwrights about the plays themselves and about various phases of the development of the productions. Highlights of the history of the Children's Theatre Company and of the aims and accomplishments of its director, John Clark Donahue, are given, and these will be of particular interest to anyone in the children's theater field.

The photographic illustrations, which include a number in color, show various aspects of Children's Theatre Company productions. There are also musical examples from the original scores for the plays.

AUTHOR BIOGRAPHY
Linda Walsh Jenkins is a writer and consultant for television and film producers in Los Angeles.