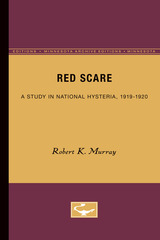 Few periods in American history have been so dramatic, so fraught with mystery, or so bristling with fear and hysteria as were the days of the great Red Scare that followed World War I. For sheer excitement, it would be difficult to find a more absorbing tale than the one told here. The famous Palmer raids of that era are still remembered as one of the most fantastic miscarriages of justice ever perpetrated upon the nation. The violent labor strife still makes those who lived through it shudder as they recall the Seattle general strike and Boston police strike, the great coal and steel strikes, and the bomb plots, shootings, and riots that accompanied these conflicts. But, exciting as the story may be, it has far greater significance than merely that of a lively tale. For, just as American was swept by a wave of unreasoning fear and was swayed by sensational propaganda in those days, so are we being tormented by similar tensions in the present climate of the cold war.

The objective analysis of the great Red Scare which Mr. Murray provides should go a long way toward helping us to avert some of the tragic consequences that the nation suffered a generation ago before hysteria and fear had finally run their course. The author traces the roots of the phenomenon, relates the outstanding events of the Scare, and evaluates the significant effects of the hysteria upon subsequent American life.