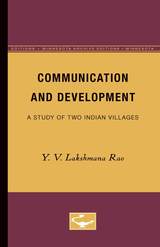 Communication and Development was first published in 1966. Minnesota Archive Editions uses digital technology to make long-unavailable books once again accessible, and are published unaltered from the original University of Minnesota Press editions.

What role does communication play in the economic, social, and political development of a community? The results of the study reported here, based on comprehensive field work in two small villages in India, throw considerable light on that question, one which is of fundamental importance to those concerned with rates and patterns of growth in any developing country.

In this study, the term "communication" refers to a social process—the flow of information, the circulation of knowledge and ideas in society, the propagation and internalization of thoughts. It does not refer to the media or means of communication, such as electronics, roads and railways, or vehicles.

The two villages studied, both in South India, were at contrasting stages of development. One was becoming industrialized, while the other still clung to such traditional ways as the barter system. To carry out the field work for his study, Dr. Rao lived in these villages for several months, talking at length with the people, obtaining information about their attitudes, beliefs, and opinions, and observing them and their surroundings with a trained eye. He also checked official records for pertinent information. He analyzes his findings from a psychological and sociological standpoint and, in addition, provides an intimate description of the village life.

The book will be of particular interest to communications specialists, anthropologists, sociologists, political scientists, economists, and others concerned with studies of the developing countries in Asia, Africa, and Latin America.

AUTHOR BIOGRAPHY
Y.V. Lakshmana Rao was a research fellow at Stanford University’s Institute for Communication Research when he made this study. Rao was a member of UNESCO’s Department of Mass Communication, Paris, and was formerly deputy director of the Press Institute of India, Delhi. He worked on the staffs of two Indian newspapers, the Statesman, New Delhi, and the Indian Express, Madras.