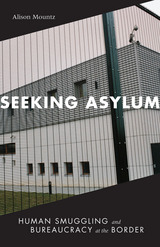 In July 1999, Canadian authorities intercepted four boats off the coast of British Columbia carrying nearly six hundred Chinese citizens who were being smuggled into Canada. Government officials held the migrants on a Canadian naval base, which it designated a port of entry. As one official later recounted to the author, the Chinese migrants entered a legal limbo, treated as though they were walking through a long tunnel of bureaucracy to reach Canadian soil.

The “long tunnel thesis” is the basis of Alison Mountz’s wide-ranging investigation into the power of states to change the relationship between geography and law as they negotiate border crossings. Mountz draws from many sources to argue that refugee-receiving states capitalize on crises generated by high-profile human smuggling events to implement restrictive measures designed to regulate migration. Whether states view themselves as powerful actors who can successfully exclude outsiders or as vulnerable actors in need of stronger policies to repel potential threats, they end up subverting access to human rights, altering laws, and extending power beyond their own borders.

Using examples from Canada, Australia, and the United States, Mountz demonstrates the centrality of space and place in efforts to control the fate of unwanted migrants.
AUTHOR BIOGRAPHY

Alison Mountz is associate professor of geography at Syracuse University.


Acknowledgments, Abbreviations, Introduction: Struggles to Land in States of Migration, 1. Human Smuggling and Refugee Protection, 2. Seeing Borders like a State, 3. Ethnography of the State, 4. Crisis and the Making of the Bogus Refugee, 5. Stateless by Geographical Design, 6. In the Shadows of the State, 7. What Kind of State Are We In? Notes, Bibliography, Index