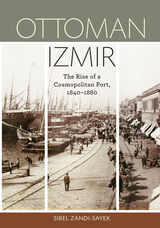 Between 1840 and 1880, the Eastern Mediterranean port of Izmir (Smyrna) underwent unprecedented change. A modern harbor that welcomed international steamships and new railway lines that transported a cornucopia of products transformed the physical city. Migrants, seasonal workers, and transient sailors thronged into an already diverse metropolis, helping to double the population to 200,000. Simultaneously, Ottoman officials and enterprising citizens vied to control and reform the city’s administrative and legal institutions.

Ottoman Izmir examines how urban space, institutional structures, and everyday practices shaped one another in the thriving seaport of Izmir during a volatile period of growth. Sibel Zandi-Sayek investigates a variety of urban actors—Muslims and non-Muslims, Ottomans and Europeans, newcomers and native residents, merchants, investors, civil servants, and press reporters—who were actively engaged in restructuring the city. Concentrating on the workings of urban committees and on laws and policies that were written, rewritten, but never fully implemented, Zandi-Sayek exposes how modern interventions sought to impose clear-cut concepts of public and private, safety and danger, and hygiene on a city that previously had a wide range of customary regulations.

Ottoman Izmir shows how Izmir’s various stakeholders contested its built environment. In so doing, it offers a new view of the dynamics of urban modernization.

Sibel Zandi-Sayek is associate professor of art history and codirector of the Middle East Studies Program and the Asian Studies Initiative at the College of William and Mary.

Epilogue: The View from Izmir