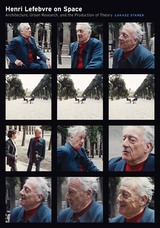 In this innovative work, Lukasz Stanek frames a uniquely contextual appreciation of Henri Lefebvre’s idea that space is a social product. Stanek explicitly confronts both the philosophical and the empirical foundations of Lefebvre’s oeuvre, especially his direct involvement in the fields of urban development, planning, and architecture.
Countering the prevailing view, which reduces Lefebvre’s theory of space to a projection of his philosophical positions, Stanek argues that Lefebvre’s work grew out of his concrete, empirical engagement with everyday practices of dwelling in postwar France and his exchanges with architects and planners. Stanek focuses on the interaction between architecture, urbanism, sociology, and philosophy that occurred in France in the 1960s and 1970s, which was marked by a shift in the processes of urbanization at all scales, from the neighborhood to the global level. Lefebvre’s thinking was central to this encounter, which informed both his theory of space and the concept of urbanization becoming global.
Stanek offers a deeper and clearer understanding of Lefebvre’s thought and its implications for the present day. At a time when cities are increasingly important to our political, spatial, and architectural world, this reassessment proposes a new empirical, and practical, interpretation of Lefebvre’s ideas on urbanism.
AUTHOR BIOGRAPHY
Lukasz Stanek is postdoctoral researcher and teacher at the Institute of History and Theory of Architecture (GTA), Faculty of Architecture, Swiss Federal Institute of Technology (ETH) in Zurich.
TABLE OF CONTENTS


Introduction
1. Henri Lefebvre: The Production of Theory
2. Research: From Practices of Habitation to the Production of Space
3. Critique: Space as Concrete Abstraction
4. Project: Urban Society and its Architecture
Afterword: Toward an Architecture of Jouissance
Acknowledgments
Notes
Bibliography
Index