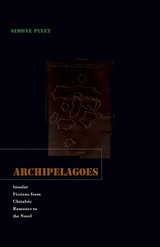 Archipelagoes examines insularity as the space for adventure in the Spanish book of chivalry, much like the space of the forest in French chivalric romance. In this innovative work, Simone Pinet explores the emergence of insularity as a privileged place for the location of adventure in Spanish literature in tandem with the cartographic genre of the isolario.
Pinet looks closely at Amadís de Gaula and the Liber insularum archipelagi as the first examples of these genres. Both isolario and chivalric romance (libros de caballerías) make of the island a flexible yet cohesive framework that becomes intrinsic to the construction of their respective genres. The popularity of these forms throughout the seventeenth century in turn bears witness to the numerous possibilities the archipelagic structure offered, ultimately taken up by the grand genres of each discipline—the atlas and the novel.
Moving from verbal descriptions to engravings and tapestry weavings, and from the chivalric politics and ethics proposed in the Amadís de Gaula to the Insula Barataria episode in Don Quixote, Pinet’s analysis of insularity and the use of the island structure reveals diverging roles for fiction, illuminating both the emergence of the novel and contemporary philosophical discussion on fiction.
AUTHOR BIOGRAPHY
Simone Pinet is associate professor of Spanish and medieval studies at Cornell University.
REVIEWS

"Archipelagoes is a work of striking originality, powerful imagination, and impressive ambition. Through a comparative study of chivalric romance (particularly Amadís), Don Quixote, and cartography, it identifies an ‘insular turn’ in late medieval and early modern culture that is central to the emergence of modern fiction." —Ricardo Padron, author of The Spacious Word: Cartography, Literature, and Empire in Early Modern Spain