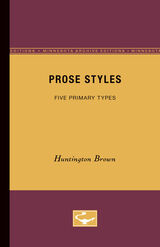 BUY
Prose Styles: Five Primary Types
by Huntington Brown
University of Minnesota Press, 1966
Paper: 978-0-8166-6688-1
Prose Styles was first published in 1966.How can one distinguish in any text between features answering to the timeless function of its type and those accountable to passing tendencies of periods, fashions, schools, and individual writers? This study is addressed to that general question, and, while it is not a writer’s manual in any sense, it should prove enlightening and helpful to anyone with a genuine interest in style.The author identifies, with concreteness as to detail and illustration, the styles of five broad types of non-metrical communication in spoken or written discourse that have been conspicuous in the culture or life of the western world from remote times. He names these styles the deliberative, the expository, the tumbling, the prophetic, and the indenture. In discussing each, he explains how each set of features is the virtually inevitable articulation of the purpose of a type of transaction the conditions of which have remained constant from age to age. He demonstrates, for example, that there are striking elementary affinities between such otherwise dissimilar works as the Sermon on the Mount and Lamb’s “Dissertation upon Roast Pig,” or between Beowulf and a modern-day newspaper sports column.Dudley Fitts comments: “This is a popular book for the literate public: no ‘easy,’ not ‘superficial,’ but clearly not recondite.”The book will be especially interesting to professional writers, as well as to students and teachers of literature.This is Volume 1, Minnesota Monographs in the Humanities, of which Gerhard H. Weiss is the series editor.