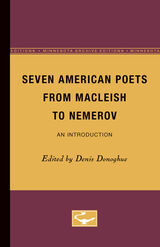 BUY
Seven American Poets from MacLeish to Nemerov: An Introduction
edited by Denis Donoghue
University of Minnesota Press, 1975
Paper: 978-0-8166-6692-8
Seven American Poets from MacLeish to Nemerov was first published in 1975. Volume 9, Minnesota Library on American Writers. Leonard Unger and George T. Wright, series editorsThe Minnesota Library on American Writers, of which this is the ninth volume, is based on collections of pamphlets from the series of University of Minnesota Pamphlets on American Writers. This book focuses on seven important contemporary American poets. The subject poets and the respective authors are Archibald MacLeish by Grover Smith, Richard Eberhart by Ralph J. Mills, Jr., Theodore Roethke, also by Mr. Mills, Randall Jarrell by M.L. Rosenthal, John Berryman by William J. Martz, Robert Lowell by Jay Martin, and Howard Nemerov by Peter Meinke.Mr. Donoghue writes an introduction in which he notes that “seven modern American poets demonstrate seven different ways of being an American.” He continues: “It is not my business, nor would it give me any pleasure, to comment on the difficulty of being an American poet: I am neither American nor a poet. But it is my impression that American poets have become more skillful in the art of being themselves; poets born in 1920 or later have had the advantage of seeing a thousand ways in which the job has been done, and the encouragement of such examples. Each poet must still do the work for himself, but he has before him the pioneers from Poe and Whitman to Williams, and he knows by their example what it means to work in the American grain.”In addition to the critical introductions there are selected bibliographies for each of the seven poets.