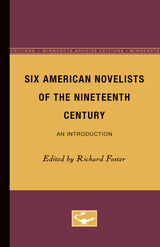 Six American Novelists of the Nineteenth Century: An Introduction
edited by Richard Foster
University of Minnesota Press, 1968
Paper: 978-0-8166-6693-5
Six American Novelists of the Nineteenth Century was first published in 1968.This volume, based on material from the University of Minnesota Pamphlets on American Writers, provides concise critical introductions to six nineteenth-century American novelists of major importance. The novelists discussed and the contributing authors are “James Fenimore Cooper” by Robert E. Spiller, “Nathaniel Hawthorne” by Hyatt H. Waggoner, “Herman Melville” by Leon Howard, “Mark Twain” by Lewis Leary, “William D. Howells” by William M. Gibson, and “Henry James” by Leon Edel. Biographical information about the writers is included with the critical discussions of their work. A selected bibliography for each novelists lists his works and critical and biographical writing about him.In his introduction to the volume Professor Foster offers a perspective view of the genius of nineteenth century American literature, a literature of innovative vision which he calls unique in its time. “Only one other national literature of the nineteenth century was so marked by intensity, idiosyncrasy, and the spirit of discovery as America’s - that of Russia,” Professor Foster writes. “If their typical postures in relation to ‘Europe’ were different, American and Russian writers of the nineteenth century nevertheless had in common something far more significant: the uniquely dramatic subject matter, bequeathed them by history, of a nation’s self-discovery and self-creation. This was epic material; and fiction, especially the novel, was the aptest means of imaginatively encompassing it.”