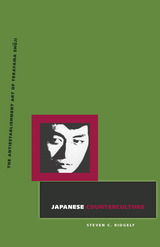 Terayama Shuji (1935-1983) was an avant-garde Japanese poet, dramatist, film director, and photographer known for his highly provocative work. In this inventive and revealing work, Steven Ridgely examines Terayama's life and art to show that a conventional notion of him does not do full justice to the meaning and importance of his wide-ranging, often playful body of work.
Ridgely places Terayama at the center of Japanese and global counterculture and finds in his work a larger story about the history of postwar Japanese art and culture. He sees Terayama as reflecting the most significant events of his day: young poets seizing control of haiku and tanka in the 1950s, radio drama experimenting with form and content after the cultural shift to television around 1960, young assistant directors given free rein in the New Wave as cinema combated television, underground theatre in the politicized late 1960s, and experimental short film through the 1970s after both the studio system and art house cinema had collapsed.
Featuring close readings of Terayama's art, Ridgely demonstrates how across his oeuvre there are patterns that sidestep existing power structures, never offering direct opposition but nevertheless making the opposition plain. And, he claims, there is always in Terayama's work a broad call for seeking out or creating pockets of fiction-where we are made aware that things are not what they seem-and to use otherness in those spaces to take a clearer view of reality.
AUTHOR BIOGRAPHY
Steven C. Ridgely is assistant professor of Japanese literature at the University of Wisconsin-Madison.
TABLE OF CONTENTS