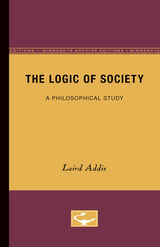 BUY
The Logic of Society: A Philosophical Study
by Laird Addis
University of Minnesota Press, 1975
Paper: 978-0-8166-6828-1
The Logic of Society was first published in 1975.In recent years challenges have arisen from various quarters, even within analytic philosophy itself, to the positivist conception of science, especially in its application to history and other social sciences. From a neo-positivist viewpoint Professor Addis attempts to meet some of these challenges. Underlying his work are the beliefs that every even that occurs, including human choices and actions, is capable of being given an explanation of the hypothetico-deductive sort, that the task of all the sciences therefore is the search for knowledge of a lawful kind, and that this knowledge is to be had only by methods which are similar throughout the sciences.The author’s neo-positivism is qualified in various ways: among others by an insistence on the necessity of a metaphysical basis for the philosophy of history and other social sciences and the contention that none of the social sciences, at least as their limits of investigation are usually conceived, can expect ever to have theories of the scope and reliability of the most highly developed sciences.The chapters deal with several traditional and contemporary issues in the philosophy of history and social sciences. Among them are the nature of social reality, the possibility of reducing sociological explanations to psychological explanations, the limits and possibilities of social theory, historical explanation, and historicism and the laws of historical development. Thinker whose ideas are given substantial treatment are Durkheim, Marx, Ortega y Gasset, Popper, Plamenatz, and MacIntyre. Other theorists who are discussed critically include Sartre, Lenin, Hook, Brodbeck, and Donagan.