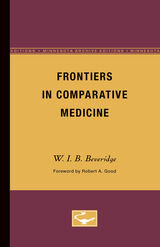 BUY
Frontiers in Comparative Medicine
by W.I.B. Beveridge
University of Minnesota Press, 1972
Paper: 978-0-8166-6837-3
Frontiers in Comparative Medicine was first published in 1972.In this initial volume of the series to be based on the Wesley W. Spink Lectures on Comparative Medicine, Dr. Beveridge, the noted British scientist, discusses the contributions to human medicine resulting from studies of disease in animals. The book serves as an excellent introduction to this important aspect of science, suitable for general readers as well as for those studying or working in the medical, biological, or social sciences.Dr. Beveridge examines the methodology of comparative science and tells of the remarkable series of key discoveries of disease agents which have emerged from research on animals. He explains the reasons for the success of animal studies in connection with human disease and makes a strong case for more research on naturally occurring animal models.The author describes current comparative studies in cancer, cardiovascular diseases, neuropathology, immunopathology, congenial defects, metal health, reproduction, and population regulation. He shows that in each of these subjects results that have far-reaching implications for human welfare and medicine are being obtained. In the final section he assembles the available evidence about the origin of human influenza pandemics. He points to a conclusion that they probably result from a hybridization of human and animal strains of the disease agent and that the usual place where this occurs appears to be the plains of Central Asia. He emphasizes the need for an international investigation of the problem of influenza, in the hope of preventing these pandemics.