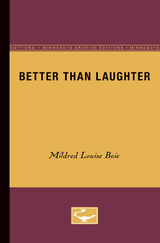 Better than Laughter
by Mildred Boie
University of Minnesota Press, 1946
Paper: 978-0-8166-6838-0
Better than Laughter was first published in 1946.This first collection of the poems of Mildred Louise Boie reflects the free and perceptive spirit of a young woman who followed a fascinating variety of paths. Upon release from the American Red Cross, she served in Italy, France, and Germany, assisting in civilian relief, and was awarded the Bronze Star Medal by the United States Army for meritorious service. She taught at Smith College and at the University of Minnesota and was an associate editor of the Atlantic Monthly.A number of these poems have been previously published in the Atlantic Monthly, American Mercury, Harper’s, Poet Lore, New York Times, Christian Register, Radcliffe Quarterly, and Vineyard Gazette.