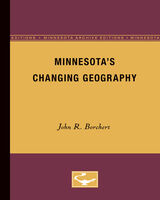 BUY
Minnesota’s Changing Geography
by John Borchert
University of Minnesota Press, 1959
Paper: 978-0-8166-6839-7
Minnesota’s Changing Geography was first published in 1959.This book is intended to help children understand how the state of Minnesota developed as it did, what it looks like today, and why. The story, pictures, and maps tell of Minnesota’s changing geography, but the subject embraces a good deal that lies beyond the boundaries of one state. The settlement of the land, its industry and commerce, its climate - these and other parts of the story give young readers perspective to see Minnesota as part of the larger community of the nation and the world. By showing how the land and its use have changed, the book also helps children to realize that their environment is not static, but constantly changing.In each section of the book, the author describes the characteristic features of a major region or settlement of the state. He shows why the dairy region, the corn belt, the timber country, the mining range, and other important economic areas developed in their distinctive ways. He describes the various kinds of settlements to be seen in the state - farm-trade villages, towns, cities, and suburbs. He traces the networks of transportation - rail routes, waterways, truck routes, pipelines, airways, and city traffic. Finally, he explains the elements of local, state, and federal government.A series of tables at the back of the book provides statistics on Minnesota’s population, county by county, on area, temperature, and rainfall, and significant dates in the state’s history.For children in the classroom, in the library, or at home, here is Minnesota in its physical, real-life sense, presented as a part of a large and changing world. Readable, authentic, up-to-date, the book was prepared with the help of consultants from the Minneapolis public schools.