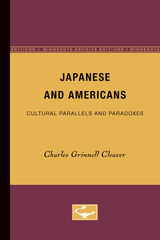 BUY
Japanese and Americans: Cultural Parallels and Paradoxes
by Charles Cleaver
University of Minnesota Press, 1976
Paper: 978-0-8166-6846-5
Japanese and Americans was first published in 1976.Long periods of residence, study, and teaching in Japan have given Professor Cleaver an opportunity to observe its culture and to compare it with that of the United States, where he is a specialist in American studies. He reaches the conclusion that differences in the two cultures have been emphasized so much that similarities have been overlooked. Further, he points out, when differences have been discovered, a moral judgment has often been implied. In this book he provides a balanced view which will, it is hoped, contribute to a better understanding between the two countries.Since an exhaustive comparison of the two cultures is out of the question within the limits of a single volume, he has chosen the method of an oil prospector, drilling down here and there, where science or hunch suggests there might be a payoff. In his study he uses the word culture in the manner of the anthropologist as meaning the whole way of life. He places more emphasis, however, than the ordinary anthropologist does on the clues which the arts provide. Thus, among the subjects he discusses at some length are fictional writing and architecture. Among his other subjects are political and military nationalism, international economic reputations of the two countries, attitudes toward nature, and the organization of work and leisure. In his concluding chapter he discusses current tendencies toward local and international loyalties as opposed to those which are national, and the growing interest in cultural nationalism which accompanies a distrust of political and military nationalism. Finally, he makes a plea for an international community with cultural diversity.