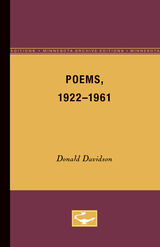 BUY
Poems, 1922-1961
by Donald Davidson
University of Minnesota Press, 1966
Paper: 978-0-8166-6852-6
Poems, 1922-1961 was first published in 1966.This volume contains a collection of the most important work of Donald Davidson, one of America’s greatest contemporary poets. The selection range from the time of his association with the Fugitive group of Southern writers during the 1920’s to his most recently published book of poems, The Long Street (1961). The Tall Men, first published in 1927, is included here in its revised version of 1938. Among the other early poems are selections from An Outland Piper (1924) and from Lee in the Mountains and Other Poems (1938).The critic Louis D. Rubin, Jr. calls this “the life work of a master poet.” He comments: “These poems don’t date; they represent no outmoded school or clique . . . and the new poems have a simplicity about them that does not hide so much as it enhances their rich imaginativeness and wealth of imagery. These are the poems of a man of great sensitivity and an exciting imagination and command of the language.”