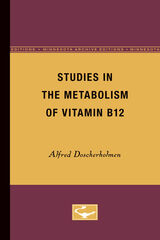 BUY
Studies in the Metabolism of Vitamin B12
by Alfred Doscherholmen
University of Minnesota Press, 1965
Paper: 978-0-8166-6853-3
Studies in the Metabolism of Vitamin B12 was first published in 1965.Dr. Doscherholmen has conducted extensive studies of the physiological aspects of vitamin B12 metabolism in man, and in this book he describes the investigations, reports the findings, and reviews the literature. He also reports on laboratory animal studies which contribute to a knowledge of the subject.The major investigations were performed in a clinical setting and involved the administration of doses of radiocyanocobalamin, the radioactive form of vitamin B12, to patients offlicted with various diseases and to normal subjects. In order to diagnose malabsorption of B12, the Schilling test was performed on patients having pernicious anemia, partial or total gastrectomy, histamine-fasct achlorhydria, posterolateral column disease without anemia, intestinal megaloblastic anemia, regional ileitis, sprue, secondary steatorrhea, cirrhosis of the liver, leukemia, and various types of neuritis.The author assesses the most commonly used methods of testing B12 absorption, the urinary excretion test, and reports his attempts to improve the urinary recovery of radioactivity. He describes a new technique for the measurement of B12 absorption -- the plasma absorption test -- and evaluates its clinical usefulness. He also reports on studies of the basic mechanism of the Schilling test, the organ distribution of radioactivity, and the kinetics of cyanocobalamin in man after the oral ingestion of physiologic doses of radiocyanocobalamin. Additional studies described are concerned with the B12 binding power of serum as determined through an ultrafiltration technique, the enzymatic release of B12 in the small intestine of rats, and the hepatic storage of radiocyanocobalamin. There is an extensive bibliography.