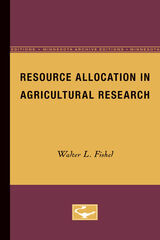 BUY
Resource Allocation in Agricultural Research
edited by Walter Fishel
University of Minnesota Press, 1971
Paper: 978-0-8166-6859-5
Resource Allocation in Agricultural Research was first published in 1971.The new knowledge produced by research has accounted for an increasing share of national economic growth in this country. As the economic importance of research has risen, the emerging problems attendant on the allocation of resources to research has attracted increased professional attention.This book presents the views and findings of a number of experts concerned with the problems, issues, and procedures involved in the allocation of resources for agricultural research. The twenty-one contributors include agricultural and general economists, public administration officials, scientists, and other specialists. The chapters are based on papers given at a symposium which was sponsored jointly by the Minnesota Agricultural Experiment Station and the Cooperative States Research Service of the U.S. Department of Agriculture.In his preface Walter L. Fishel, the volume editor, explains: “While the symposium participants presented varying points of view and different approaches to the problems on resource allocation in agricultural research, they generally shared the orientation of economic theory. Both the issues examined and the debate reflect this perspective. The general assumption was that the allocation problem to a considerable extent can be approached within an economic framework. More specifically, it was generally agreed that research may be viewed as an economic activity since it requires scarce resources and produces something of value.”After an introductory chapter which explains the problems and issues, the rest of the volume is divided into sections on research and welfare, investments in research, decision making in practice, and decision making experiments.