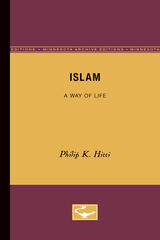 BUY
Islam: A Way of Life
by Philip Hitti
University of Minnesota Press, 1970
Paper: 978-0-8166-6879-3
Professor Hitti, the distinguished orientalist, writes vividly and on a basis of lifelong scholarship about Islam, showing that it is not only a religion but also a state and a culture and that in these overlapping and interacting aspects it is a whole way of life.Writing of Islam the religion Professor Hitti describes it as a system of beliefs and practices initially revealed by Allah to Muhammad in the seventh century, enshrined in the Arabic Koran, complemented by tradition, and modified through the ages in response to changes in time and place.Islam the state, he shows, is a political entity with an aggregate of institutions based on koranic law, founded by Muhammad in Medina, developed by his successors (caliphs) at the expense of the Persian and East Roman empires to a height unattained in either ancient or medieval times, and then fragmented into splinter states in western Asia, northern Africa, and southwestern and southeastern Europe.Islam the culture, he explains, is a compound of varied elements -- ancient Semitic, Indo-Persian, Hellenic -- synthesizes under the caliphate and expressed primarily through the medium of the Arabic tongue. Unlike the other two, Islam the culture was mainly formulated by conquered peoples rather than by Arabians. From the middle of the eighth century to the end of the twelfth century, it was unsurpassed in its literary, scientific, and philosophic output. In the final chapter, discussing the confrontation of Islamic culture with modernity, the author maintains that the world can view with gratitude Arab contributions to the past and can look with hope to their accomplishments in the future.