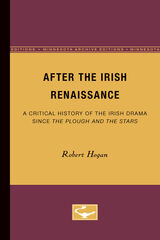 After the Irish Renaissance: A Critical History of the Irish Drama since The Plough and The Stars
by Robert Hogan
University of Minnesota Press, 1967
Paper: 978-0-8166-6881-6
After the Irish Renaissance was first published in 1967.This account of contemporary Irish drama provides critical introductions to some thirty or forty playwrights who have worked in Ireland since 1926, the year Sean O’Casey left Ireland following a riotous protest against his play The Plough and the Stars. The date is regarded by many as marking the end of the Irish Renaissance, the brilliant literary flowering which began with the founding of the Irish Literary Theatre in 1898 by W. B. Yeats, George Moore, and Edward Martyn.Although much has been written about the writers of the Irish Renaissance and their work, most of the plays and playwrights of the modern Irish theatre are relatively obscure outside Ireland. This book introduces their work to a broader audience.Among the writers discussed, in addition to O’Casey and Yeats, are Lennox Robinson, T. C. Murray, Brinsley MacNamara, George Shiels, Louis D’Alton, Paul Vincent Carroll, Denis Johnston, Mary Manning, Micheál Mae Liammóir, Michael Molloy, Walter Macken, Seamus Byrne, John O’Donovan, Bryan MacMahon, Lady Longford, Brendan Behan, Hugh Leonard, James Douglas, John B. Keane, Brian Friel, Tom Coffey, Seamus de Burca, Conor Farrington, G. P. Gallivan, Austin Clarke, Padraie Fallon, Donagh MacDonagh, Joseph Tomelty, and Sam Thompson. The author also discusses the Abbey Theatre’s recent history, the Gate Theatre, Longford Productions, the theatre in Ulster, and the Dublin International Theatre Festival, and provides a full bibliography of plays and criticism. The book is generously illustrated with photographs.