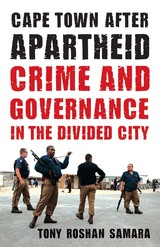 Nearly two decades after the dismantling of apartheid in South Africa, how different does the nation look? In Cape Town, is hardening inequality under conditions of neoliberal globalization actually reproducing the repressive governance of the apartheid era? By exploring issues of urban security and development, Tony Roshan Samara brings to light the features of urban apartheid that increasingly mark not only Cape Town but also the global cities of our day—cities as diverse as Los Angeles, Rio de Janeiro, Paris, and Beijing.
Cape Town after Apartheid focuses on urban renewal and urban security policies and practices in the city center and townships as this aspiring world-class city actively pursues a neoliberal approach to development. The city’s attempt to escape its past is, however, constrained by crippling inequalities, racial and ethnic tensions, political turmoil, and persistent insecurity. Samara shows how governance in Cape Town remains rooted in the perceived need to control dangerous populations and protect a somewhat fragile and unpopular economic system. In urban areas around the world, where the affluent minority and poor majority live in relative proximity to each other, aggressive security practices and strict governance reflect and reproduce the divided city.
A critical case for understanding a transnational view of urban governance, especially in highly unequal, majority-poor cities, this closely observed study of postapartheid Cape Town affords valuable insight into how security and governance technologies from the global North combine with local forms to create new approaches to social control in cities across the global South.
AUTHOR BIOGRAPHY
Tony Roshan Samara is assistant professor of sociology and anthropology at George Mason University.
TABLE OF CONTENTS


Acknowledgments
List of Abbreviations and Acronyms
Map of Cape Town
Introduction: Urban Geopolitics, Neoliberalism, and the Governance of Security
1. Security and Development in Post-Apartheid South Africa
2. Children in the Streets: Urban Governance in Cape Town City Center
3. Gangsterism and the Policing of the Cape Flats
4. The Weight of Policing on the Fragile Ground of Transformation
5. The Production of Criminality on the Urban Periphery
Conclusion: Apartheid, Democracy and the Urban Future
Notes
Index