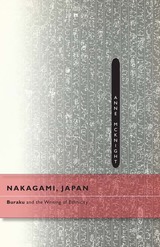 How do you write yourself into a literature that doesn’t know you exist? This was the conundrum confronted by Nakagami Kenji (1946–1992), who counted himself among the buraku-min, Japan’s largest minority. His answer brought the histories and rhetorical traditions of buraku writing into the high culture of Japanese literature for the first time and helped establish him as the most canonical writer born in postwar Japan.
In Nakagami, Japan, Anne McKnight shows how the writer’s exploration of buraku led to a unique blend of fiction and ethnography—which amounted to nothing less than a reimagining of modern Japanese literature. McKnight develops a parallax view of Nakagami’s achievement, allowing us to see him much as he saw himself, as a writer whose accomplishments traversed both buraku literary arts and high literary culture in Japan.
As she considers the ways in which Nakagami and other twentieth-century writers used ethnography to shape Japanese literature, McKnight reveals how ideas about language also imagined a transfigured relation to mainstream culture and politics. Her analysis of the resulting “rhetorical activism” lays bare Nakagami’s unique blending of literature and ethnography within the context of twentieth-century ideas about race, ethnicity, and citizenship—in Japan, but also on an international scale.
AUTHOR BIOGRAPHY
Anne McKnight is assistant professor of East Asian languages and cultures and comparative literature at the University of Southern California.
TABLE OF CONTENTS


Acknowledgments
Introduction: I Is an Other
1. An Archive of Activism
2. Confession and the Crisis of Buraku Writing in the 1970s
3. Constituents of National Literature
4. Inaudible Man
5. The 8th Parallax: Nakagami in/and Korea
6. Subculture and the South
Conclusion
Notes
Index