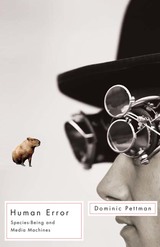 What exactly is the human element separating humans from animals and machines? The common answers that immediately come to mind—like art, empathy, or technology—fall apart under close inspection. Dominic Pettman argues that it is a mistake to define such rigid distinctions in the first place, and the most decisive “human error” may be the ingrained impulse to understand ourselves primarily in contrast to our other worldly companions.
In Human Error, Pettman describes the three sides of the cybernetic triangle—human, animal, and machine—as a rubric for understanding key figures, texts, and sites where our species-being is either reinforced or challenged by our relationship to our own narcissistic technologies. Consequently, species-being has become a matter of specious-being, in which the idea of humanity is not only a case of mistaken identity but indeed the mistake of identity.
Human Error boldly insists on the necessity of relinquishing our anthropomorphism but also on the extreme difficulty of doing so, given how deeply this attitude is bound with all our other most cherished beliefs about forms of life.
AUTHOR BIOGRAPHY
Dominic Pettman is associate professor of culture and media at New School University.
TABLE OF CONTENTS