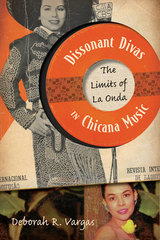 Musical sound has been central to heteromasculinist productions of nation and homeland, whether Chicano, Tejano, Texan, Mexican, or American. If this assertion holds true, as Deborah R. Vargas suggests, then what are we to make of those singers and musicians whose representations of gender and sexuality are irreconcilable with canonical Chicano/Tejano music or what Vargas refers to as “la onda”? These are the “dissonant divas” Vargas discusses, performers who stimulate our listening for alternative borderlands imaginaries that are inaudible within the limits of “la onda.”

Dissonant Divas in Chicana Music focuses on the Texan monument of the Alamo and its association with Rosita Fernandez; Tejano corrido folklore and its musical antithesis in Chelo Silva; the female accordion-playing bodies of Ventura Alonza and Eva Ybarra as incompatible with the instrumental labor of conjunto music; geography as national border, explored through the multiple national music scales negotiated by Eva Garza; and racialized gender, viewed through Selena’s integration of black diasporic musical sound. Vargas offers a feminist analysis of these figures’ contributions by advancing a notion of musical dissonance—a dissonance that recognizes the complexity of gender, sexuality, and power within Chicana/o culture.

Deborah R. Vargas is associate professor of Chicano/Latino studies at the University of California, Irvine.

5. Giving Us That Brown Soul: Selena's Departures and Arrivals

Epilogue: The Borderlands Rock Reverb of Gloria Rios and Girl in a Coma