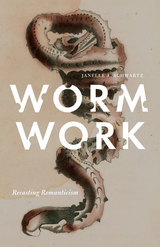 Worms. Natural history is riddled with them. Literature is crawling with them. From antiquity to today, the ubiquitous and multiform worm provokes an immediate discomfort and unconscious distancing: it remains us against them in anthropocentric anxiety. So there is always something muddled, or dirty, or even offensive when talking about worms. Rehabilitating the lowly worm into a powerful aesthetic trope, Janelle A. Schwartz proposes a new framework for understanding such a strangely animate nature. Worms, she declares, are the very matter with which the Romantics rethought the relationship between a material world in constant flux and the human mind working to understand it.

Worm Work studies the lesser-known natural historical records of Abraham Trembley and his contemporaries and the familiar works of Erasmus Darwin, Charles Darwin, William Blake, Mary Shelley, and John Keats, to expose the worm as an organism that is not only reviled as a taxonomic terror but revered as a sign of great order in nature as well as narrative. This book traces a pattern of cultural production, a vermiculture that is as transformative of matter as it is of mind. It distinguishes decay or division as positive processes in Romantic era writings, compounded by generation or renewal and used to represent the biocentric, complex structuring of organicism.

Offering the worm as an archetypal figure through which to recast the evolution of a literary order alongside questions of taxonomy from 1740 to 1820 and on, Schwartz unearths Romanticism as a rich humus of natural historical investigation and literary creation.

Janelle A. Schwartz is visiting assistant professor of comparative literature at Hamilton College.

1. Transitional Tropes: The Nature of Life in European Romantic Thought

2. “Unchanging but in Form”: The Aesthetic Episteme of Erasmus Darwin

3. “Not without some Repugnancy, and a Fluctuating Mind”: Trembley’s Polyp and the Practice of Eighteenth-Century Taxonomy

4. “Art Thou but a Worm?”: Blake and the Question Concerning Taxonomy

5. A Diet of Worms; or, Frankenstein and the Matter of a Vile Romanticism

Conclusion: “Wherefore All This Wormy Circumstance?”