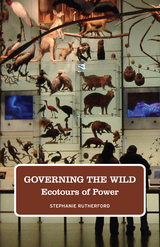 Take four emblematic American scenes: the Hall of Biodiversity at the American Museum of Natural History in New York; Disney’s Animal Kingdom theme park in Orlando; an ecotour of Yellowstone and Grand Teton National Parks; the film An Inconvenient Truth. Other than expressing a common interest in the environment, they seem quite dissimilar.

And yet, as Governing the Wild makes clear, these sites are all manifestations of green governmentality, each seeking to define and regulate our understanding, experience, and treatment of nature. Stephanie Rutherford shows how the museum presents a scientized assessment of global nature under threat; the Animal Kingdom demonstrates that a corporation can successfully organize a biopolitical project; the ecotour, operating as a school for a natural aesthetic sensibility, provides a visual grammar of pristine national nature; and the film offers a toehold on a moral way of encountering nature. But one very powerful force unites the disparate “truths” of nature produced through these sites, and that, Rutherford tells us, is their debt to nature’s commodification.

Rutherford’s analysis reveals how each site integrates nature, power, and profit to make the buying and selling of nature critical to our understanding and rescuing of it. The combination, she argues, renders other ways of encountering nature—particularly more radically environmental ways—unthinkable.

Stephanie Rutherford is assistant professor in the environmental and resource studies program at Trent University.

1. Ordering Nature at the American Museum of Natural History
2. Disney’s Animal Kingdom: “The Wild Was Never This Wild”™
3. Wolves, Bison, and Bears, Oh My! Defining Nature at Yellowstone and Grand Teton National Parks
4. Science and Storytelling: Al Gore and the Climate Debate