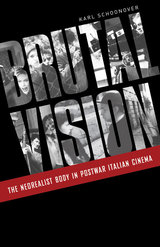 Film history identifies Italian neorealism as the exemplar of national cinema, a specifically domestic response to wartime atrocities. Brutal Vision challenges this orthodoxy by arguing that neorealist films—including such classics as Rome, Open City; Paisan; Shoeshine; and Bicycle Thieves—should be understood less as national products and more as complex agents of a postwar reorganization of global politics. For these films, cinema facilitates the liberal humanist sympathy required to usher in a new era of world stability.

In his readings of crucial films and newly discovered documents from the archives of neorealism’s international distribution, Karl Schoonover reveals how these films used images of the imperiled body to reconstitute the concept of the human and to recalibrate the scale of human community. He traces how Italian neorealism emerges from and consolidates the transnational space of the North Atlantic, with scenarios of physical suffering dramatizing the geopolitical stakes of a newly global vision. Here we see how—in their views of injury, torture, and martyrdom—these films propose a new mode of spectating that answers the period’s call for extranational witnesses, makes the imposition of limited sovereignty palatable, and underwrites a new visual politics of liberal compassion that Schoonover calls brutal humanism.

These films redefine moviegoing as a form of political action and place the filmgoer at the center of a postwar geopolitics of international aid. Brutal Vision interrogates the role of neorealism’s famously heart-wrenching scenes in a new global order that requires its citizenry to invest emotionally in large-scale international aid packages, from the Marshall Plan to the liberal charity schemes of NGOs. The book fundamentally revises ideas of cinematic specificity, the human, and geopolitical scale that we inherit from neorealism and its postwar milieu—ideas that continue to set the terms for political filmmaking today.

Karl Schoonover is assistant professor of film studies in the Department of English at Michigan State University. He coedited the anthology Global Art Cinema: New Theories and Histories.