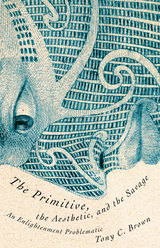 Tony C. Brown examines “the inescapable yet infinitely troubling figure of the not-quite-nothing” in Enlightenment attempts to think about the aesthetic and the savage. The various texts Brown considers—including the writings of Addison, Rousseau, Kant, and Defoe—turn to exotic figures in order to delimit the aesthetic, and to aesthetics in order to comprehend the savage.

In his intriguing exploration Brown discovers that the primitive introduces into the aesthetic and the savage an element that proves necessary yet difficult to conceive. At its most profound, Brown explains, this element engenders a loss of confidence in one’s ability to understand the human’s relation to itself and to the world. That loss of confidence—what Brown refers to as a breach in anthropological security—traces to an inability to maintain a sense of self in the face of the New World. Demonstrating the impact of the primitive on the aesthetic and the savage, he shows how the eighteenth-century writers he focuses on struggle to define the human’s place in the world. As Brown explains, these authors go back again and again to “exotic” examples from the New World—such as Indian burial mounds and Maori tattooing practice—making them so ubiquitous that they come to underwrite, even produce, philosophy and aesthetics.

Tony C. Brown is associate professor at the University of Minnesota, Twin Cities, where he teaches eighteenth-century literature and literary theory.

Note on Texts and Translations

6. Adding History to a Footprint in Robinson Crusoe

7. Indian Mounds in the End-of-the-Line Mode

Conclusion: …as if Europe Existed