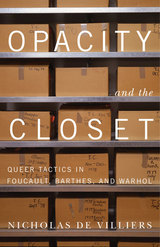 Opacity and the Closet interrogates the viability of the metaphor of “the closet” when applied to three important queer figures in postwar American and French culture: the philosopher Michel Foucault, the literary critic Roland Barthes, and the pop artist Andy Warhol. Nicholas de Villiers proposes a new approach to these cultural icons that accounts for the queerness of their works and public personas.

Rather than reading their self-presentations as “closeted,” de Villiers suggests that they invent and deploy productive strategies of “opacity” that resist the closet and the confessional discourse associated with it. Deconstructing binaries linked with the closet that have continued to influence both gay and straight receptions of these intellectual and pop celebrities, de Villiers illuminates the philosophical implications of this displacement for queer theory and introduces new ways to think about the space they make for queerness.

Using the works of Foucault, Barthes, and Warhol to engage each other while exploring their shared historical context, de Villiers also shows their queer appropriations of the interview, the autobiography, the diary, and the documentary—forms typically linked to truth telling and authenticity.

Nicholas de Villiers is assistant professor of English and film at the University of North Florida.

1. Confessions of a Masked Philosopher: Anonymity and Identification in Foucault and Guibert
2. Matte Figures: Roland Barthes's Ethics of Meaning
3. "What Do You Have to Say for Yourself?" Warhol's Opacity
4. Unseen Warhol/Seeing Barthes
5. Andy Warhol Up-Tight: Warhol's Effects
Conclusion. The Interview as Multi-Mediated Object