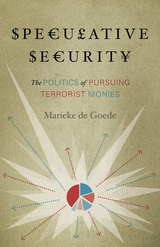 Since the terrorist acts of September 11, 2001, finance and security have become joined in new ways to produce particular targets of state surveillance. In Speculative Security, Marieke de Goede describes how previously unscrutinized practices such as donations and remittances, especially across national borders, have been affected by security measures that include datamining, asset freezing, and transnational regulation. These “precrime” measures focus on transactions that are perfectly legal but are thought to hold a specific potential to support terrorism. The pursuit of suspect monies is not simply an issue of financial regulation, she shows, but a broad political, social, and even cultural phenomenon with profound effects on everyday life.

Speculative Security offers a range of examples that illustrate the types of security interventions employed today, including the extralegal targeting and breaking up of the al-Barakaat financial network that was accompanied by raids in the United States, asset freezes in Sweden, and the incarceration of a money remitter at Guantánamo Bay. De Goede develops the paradigm of “speculative security” as a way to understand the new fusing of finance and security, denoting the speculative nature of both the means and the ends of the war on terrorist financing.

Ultimately, de Goede reveals how the idea of creating “security” appeals to multiple imaginable—and unimaginable—futures in order to enable action in the present.

Marieke de Goede is professor of politics at the University of Amsterdam. She is the author of Virtue, Fortune, and Faith: A Genealogy of Finance (Minnesota, 2005) and coeditor, with Louise Amoore, of Risk and the War on Terror.

Introduction: The Politics of Terrorism Financing

3. Following the Money: Risk, Preemption, and the Mobile Norm

4. Cash and the Circuits of Transnational Kinship

5. Zakat and the Securitization of Charitable Donation