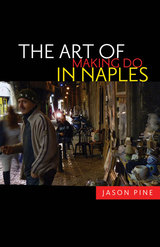 “In Naples, there are more singers than there are unemployed people.” These words echo through the neomelodica music scene, a vast undocumented economy animated by wedding singers, pirate TV, and tens of thousands of fans throughout southern Italy and beyond. In a city with chronic unemployment, this setting has attracted hundreds of aspiring singers trying to make a living—or even a fortune. In the process, they brush up against affiliates of the region’s violent organized crime networks, the camorra. In The Art of Making Do in Naples, Jason Pine explores the murky neomelodica music scene and finds himself on uncertain ground.

The “art of making do” refers to the informal and sometimes illicit entrepreneurial tactics of some Neapolitans who are pursuing a better life for themselves and their families. In the neomelodica music scene, the art of making do involves operating do-it-yourself recording studios and performing at the private parties of crime bosses. It can also require associating with crime boss-impresarios who guarantee their success by underwriting it with extortion, drug trafficking, and territorial influence. Pine, likewise “making do,” gradually realized that the completion of his ethnographic work also depended on the aid of forbidding figures.

The Art of Making Do in Naples offers a riveting ethnography of the lives of men who seek personal sovereignty in a shadow economy dominated, in incalculable ways, by the camorra. Pine navigates situations suffused with secrecy, moral ambiguity, and fears of ruin that undermine the anthropologist’s sense of autonomy. Making his way through Naples’s spectacular historic center and outer slums, on the trail of charmingly evasive neomelodici singers and unsettlingly elusive camorristi, Pine himself becomes a music video director and falls into the orbit of a shadowy music promoter who may or may not be a camorra affiliate.

Pine’s trenchant observations and his own improvised attempts at “making do” provide a fascinating look into the lives of people in the gray zones where organized crime blends into ordinary life.

Jason Pine is assistant professor of anthropology and media, society and the arts at Purchase College, State University of New York.


1. Where There’s Money, There’s the Camorra


3. The Sceneggiata: Melodramas of Manhood, Allegories of Violence

Act Three: The Erotics of Exposure


6. Who Am I and Who Are You? The Promise and Threat of Contact with the Camorra

Act One: Lying Together

Act Three: Eye of the Storm


Conclusion: Making Do with Indeterminacy