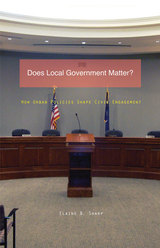 Elaine B. Sharp is professor of political science at the University of Kansas. She is the author of several books, including Morality Politics in American Cities.

Appendix A: The Study Cities and their 2000 Populations
Appendix B: Additional Detail on Content Analysis Procedures and Coding Rules