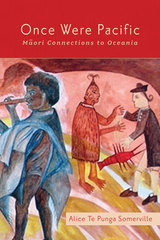 Native identity is usually associated with a particular place. But what if that place is the ocean? Once Were Pacific explores this question as it considers how Māori and other Pacific peoples frame their connection to the ocean, to New Zealand, and to each other through various creative works. Māori scholar Alice Te Punga Somerville shows how and when Māori and other Pacific peoples articulate their ancestral history as migratory seafarers, drawing their identity not only from land but also from water.

Although Māori are ethnically Polynesian, and Aotearoa New Zealand is clearly a part of the Pacific region, in New Zealand the terms “Māori” and “Pacific” are colloquially applied to two distinct communities: Māori are Indigenous, and “Pacific” refers to migrant communities from elsewhere in the region. Asking how this distinction might blur historical and contemporary connections, Te Punga Somerville interrogates the relationship between indigeneity, migration, and diaspora, focusing on texts: poetry, fiction, theater, film, and music, viewed alongside historical instances of performance, journalism, and scholarship.

In this sustained treatment of the Māori diaspora, Te Punga Somerville provides the first critical analysis of relationships between Indigenous and migrant communities in New Zealand.