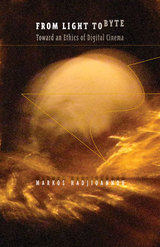 Cinema has been undergoing a profound technological shift: celluloid film is being replaced by digital media in the production, distribution, and reception of moving images. Concerned with the debate surrounding digital cinema’s ontology and the interrelationship between cinema cultures, From Light to Byte investigates the very idea of change as it is expressed in the current technological transition. Markos Hadjioannou asks what is different in the way digital movies depict the world and engage with the individual and how we might best address the issue of technological shift within media archaeologies.

Hadjioannou turns to the technical basis of the image as his first point of departure, considering the creative and perceptual activities of moviemakers and viewers. Grounded in film history, film theory, and philosophy, he explores how the digital configures its engagement with reality and the individual while simultaneously replaying and destabilizing celluloid’s own structures. He observes that, where film’s photographic foundation encourages an existential association between individual and reality, digital representations are graphic renditions of mathematical codes whose causal relations are more difficult to trace.

Throughout this work Hadjioannou examines how the two technologies set themselves up with reference to reality, physicality, spatiality, and temporality, and he concludes that the question concerning digital cinema is ultimately one of ethical implications—a question, that is, of the individual’s ability to respond to the image of the world.

Markos Hadjioannou is assistant professor in the Program in Literature and the Arts of the Moving Image Program at Duke University.


1. The Reality of the Index, or Where Does the Truth Lie

5. Tracing an Ethics of the Movie Image