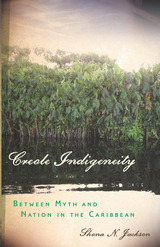 During the colonial period in Guyana, the country’s coastal lands were worked by enslaved Africans and indentured Indians. In Creole Indigeneity, Shona N. Jackson investigates how their descendants, collectively called Creoles, have remade themselves as Guyana’s new natives, displacing indigenous peoples in the Caribbean through an extension of colonial attitudes and policies.

Looking particularly at the nation’s politically fraught decades from the 1950s to the present, Jackson explores aboriginal and Creole identities in Guyanese society. Through government documents, interviews, and political speeches, she reveals how Creoles, though unable to usurp the place of aboriginals as First Peoples in the New World, nonetheless managed to introduce a new, more socially viable definition of belonging, through labor. The very reason for bringing enslaved and indentured workers into Caribbean labor became the organizing principle for Creoles’ new identities.

Creoles linked true belonging, and so political and material right, to having performed modern labor on the land; labor thus became the basis for their subaltern, settler modes of indigeneity—a contradiction for belonging under postcoloniality that Jackson terms “Creole indigeneity.” In doing so, her work establishes a new and productive way of understanding the relationship between national power and identity in colonial, postcolonial, and anticolonial contexts.

2. Labor for Being: Making Caliban Work

5. The Baptism of Soil: Indian Belonging in Guyana

Conclusion: Beyond Caliban, or the "Third Space" of Labor and Indigeneity