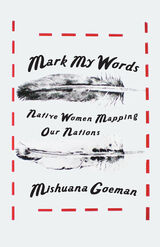 Dominant history would have us believe that colonialism belongs to a previous era that has long come to an end. But as Native people become mobile, reservation lands become overcrowded and the state seeks to enforce means of containment, closing its borders to incoming, often indigenous, immigrants.


In Mark My Words, Mishuana Goeman traces settler colonialism as an enduring form of gendered spatial violence, demonstrating how it persists in the contemporary context of neoliberal globalization. The book argues that it is vital to refocus the efforts of Native nations beyond replicating settler models of territory, jurisdiction, and race. Through an examination of twentieth-century Native women’s poetry and prose, Goeman illuminates how these works can serve to remap settler geographies and center Native knowledges. She positions Native women as pivotal to how our nations, both tribal and nontribal, have been imagined and mapped, and how these women play an ongoing role in decolonization.


In a strong and lucid voice, Goeman provides close readings of literary texts, including those of E. Pauline Johnson, Esther Belin, Joy Harjo, Leslie Marmon Silko, and Heid Erdrich. In addition, she places these works in the framework of U.S. and Canadian Indian law and policy. Her charting of women’s struggles to define themselves and their communities reveals the significant power in all of our stories.

Mishuana Goeman, Tonawanda Band of Seneca, is an Associate Professor of Gender and American Indian Studies at the University of California, Los Angeles. She received her doctorate from Stanford University's Modern Thought and Literature and was a UC Presidential Post-doctoral fellow at Berkeley. Her book was honored at the American Association for Geographic Perspectives on Women. She has published in several peer reviewed journals and has guest edited journal volumes on Native Feminisms and Indigenous Performances. She has also co-authored a book chapter in Handbook for GenderEquity on "Gender Equity for American Indians," a chapter on visual geographies and settler colonialism in Theorizing Native Studies, and a chapter on trauma, geography, and decolonization in Native Feminisms. Currently she is also part of a grant on Mapping Indigenous L.A. that is working toward creating a community oriented mobile application that decolonizes the LA landscape. Her interdisciplinary process enables her to implement a plan that tackles the complexity of Los Angeles Indigeneity and landscapes.


1. “Remember What You Are”: Gendering Citizenship, the Indian Act, and (Re)mapping the Settler Nation-State

3. From the Stomp Grounds on Up: Indigenous Movement and the Politics of Globalization

Conclusion: “She Can Map Herself Like a Country She Discovers”