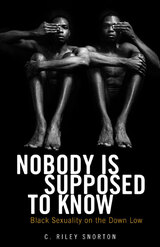 Since the early 2000s, the phenomenon of the “down low”—black men who have sex with men as well as women and do not identify as gay, queer, or bisexual—has exploded in news media and popular culture, from the Oprah Winfrey Show to R & B singer R. Kelly’s hip hopera Trapped in the Closet. Most down-low stories are morality tales in which black men are either predators who risk infecting their unsuspecting female partners with HIV or victims of a pathological black culture that repudiates openly gay identities. In both cases, down-low narratives depict black men as sexually dangerous, duplicitous, promiscuous, and contaminated.

In Nobody Is Supposed to Know, C. Riley Snorton traces the emergence and circulation of the down low in contemporary media and popular culture to show how these portrayals reinforce troubling perceptions of black sexuality. Reworking Eve Sedgwick’s notion of the “glass closet,” Snorton advances a new theory of such representations in which black sexuality is marked by hypervisibility and confinement, spectacle and speculation. Through close readings of news, music, movies, television, and gossip blogs, Nobody Is Supposed to Know explores the contemporary genealogy, meaning, and functions of the down low.

Snorton examines how the down low links blackness and queerness in the popular imagination and how the down low is just one example of how media and popular culture surveil and police black sexuality. Looking at figures such as Ma Rainey, Bishop Eddie L. Long, J. L. King, and Will Smith, he ultimately contends that down-low narratives reveal the limits of current understandings of black sexuality.

Introduction: Transpositions
1. Down Low Genealogies
2. Trapped in the Epistemological Closet
3. Black Sexual Syncretism
4. Rumor Has It
Conclusion: Down Low Diasporas