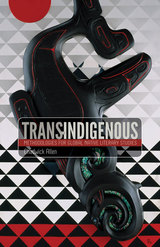 What might be gained from reading Native literatures from global rather than exclusively local perspectives of Indigenous struggle? In Trans-Indigenous, Chadwick Allen proposes methodologies for a global Native literary studies based on focused comparisons of diverse texts, contexts, and traditions in order to foreground the richness of Indigenous self-representation and the complexity of Indigenous agency.

Through demonstrations of distinct forms of juxtaposition—across historical periods and geographical borders, across tribes and nations, across the Indigenous–settler binary, across genre and media—Allen reclaims aspects of the Indigenous archive from North America, Hawaii, Aotearoa New Zealand, and Australia that have been largely left out of the scholarly conversation. He engages systems of Indigenous aesthetics—such as the pictographic discourse of Plains Indian winter counts, the semiotics of Navajo weaving, and Maori carving traditions, as well as Indigenous technologies like large-scale North American earthworks and Polynesian ocean-voyaging waka—for the interpretation of contemporary Indigenous texts. The result is a provocative reorienting of the call for Native intellectual, artistic, and literary sovereignty that fully prioritizes the global Indigenous.

Chadwick Allen is professor of English and coordinator of American Indian studies at the Ohio State University. He is the author of Blood Narrative: Indigenous Identity in American Indian and Maori Literary and Activist Texts.

2. Unsettling the Spirit of ’76: American Indians Anticipate the U.S. Bicentennial