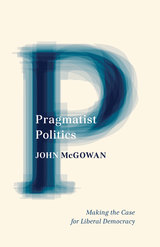 In our current age of cynicism, John McGowan suggests that the time is right to take a fresh look at pragmatism, the philosophy of American democracy. As McGowan shows, pragmatism can be an inspiring alternative to the despair that seems to dominate contemporary American politics. Pragmatist Politics is passionate and convincing, both heartfelt and clear-eyed. It offers an expansive vision of what the United States could be and should be.

From John Dewey and William James, McGowan derives a history of democracy as a way of life, characterized by a distinctive ethos and based on an understanding of politics as potentially effective collective agency. That democratic ideal is wedded to a liberalism that focuses on extending the benefits of democracy and of material prosperity to all. Beyond the intellectual case for liberal democracy, McGowan turns to how James, especially, was attuned to the ways that emotional appeals often trump persuasion through arguments, and he examines the work of Kenneth Burke, among others, to investigate the link between liberal democracy and a comic view of human life. Comedy, McGowan notes, allows consideration of themes of love, forgiveness, and generosity that figure far too infrequently in philosophical accounts of politics.

In McGowan’s work, the combination of pragmatism and comedy takes us on a wide-ranging exploration of what American politics—and by extension American life—could actually be like if it truly reflected American values.

John McGowan is the Ruel W. Tyson Jr. Distinguished Professor of Humanities and director of the Institute for the Arts and Humanities at the University of North Carolina, Chapel Hill. He is the author of five previous books, including American Liberalism.

REVIEWS
"This is an exceptional book, both instructive and challenging, and one that almost anyone concerned with the huge political problems facing modern, developed societies will welcome." —Alan Malachowski, author of The New Pragmatism


A Note on References


1. The Philosophy of Possibility